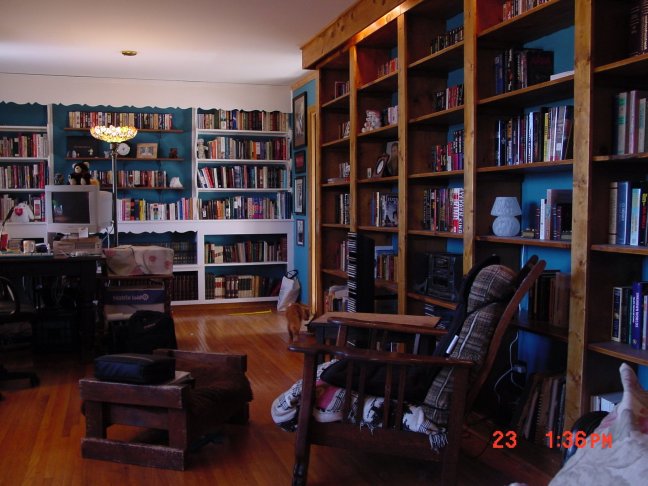 When I returned from Spokane, I brought with me my dad’s old copy of Mein Kampf, one of the few things he wanted me to have he hadn’t already given to me. I almost couldn’t find room for it, but eventually shoehorned it onto a shelf of European history. One more book for the TBR stack.

I love books. In my personal library I have nearly 5,000 of them, so picking out a favorite is just impossible. Sometimes I browse my shelves, which line most of the rooms in my house, just to remind myself of what I’ve got, what I’ve read and what I’ve not yet read. I like cheap books, and love to buy them when they’re available, to read “someday.” Most of the unread ones are among those my father passed along to me when he decided to downsize his library. So many arrived at once, in box after cardboard box, that I’ve been swamped for about eleven years. It took me until just a few years ago to organize them all, and catalog them in my database, so now I can search on the computer and not spend all day in front of the book shelves searching for a volume I just know must be here somewhere…

A great many of my books are mysteries, and some of my favorites are among them. My dad handed over some complete series of Anne Perry, Ellis Peters, and some others. I have all the Janet Evanovich Numbers books, not because they’re great mysteries but because they make me laugh and everyone needs to laugh once in a while.

Most of my very favorite books were written by Stephen King or Clive Barker. One of my treasures is a signed first edition copy of Weaveworld. Another is a signed first edition of “Bag of Bones.” I adore King, and think the most frightening book I’ve ever read was The Shining. Those  topiary animals scared the snot out of me, and since then I’ve read everything by King I could get my hands on. Several years after The Shining I read The Sun Dog by flashlight during a lightning storm. I sure know how to have a good time.

I wasn’t always into being frightened and grossed out. During the third grade I discovered Walter Farley and The Black Stallion. There was also The Island Stallion, but the Black was my dream. I must have read that book five or six times, and since I’m not a skimmer that’s saying something.

Later on, reading slowed because of life getting in the way and my habit of reading slowly, which turned out to be a light sensitivity that made it difficult to see the page properly. I avoided thick books until high school when I picked up Michener’s Hawaii and discovered I was capable of finishing a novel more than a thousand pages long. My parents wouldn’t let me go to R rated movies, but they would let me read the novels, so I read a lot of thick books which were mostly better than the movies based on them. The most fascinating of those was The Godfather, which I read several times and saw the movie. It was my first glimpse of a culture other than my own, and I boggled at the whole “family” thing. I believe it was that fascination that helped me to understand the Scottish clans I learned about and wrote about much later on.

Aside from Stephen King, I’m more a fan of individual books rather than authors. I do like Hemingway, and enjoyed For Whom the Bell Tolls. I adore Oscar Wilde’s plays, and especially his creepy novel A Picture of Dorian Gray. A more recent selection that impressed me was The Time Traveler’s Wife by Audrey Niffenegger. I love time travel stories. Tim Powers’ The Anubis Gates is my bible for time travel, and I kept it well in mind when writing my own time travel books. Isaac Asimov’s I Robot is my favorite science fiction, and in fact the computer I’m writing this on is named “Speedy” after one of Asimov’s robots. And, speaking of needing to laugh, I’ve read M*A*S*H many times.

So many books, so little time. There is no way for me to name a favorite book, but in my own library those are the highlights.