Ever since the kids became responsible, tax-paying adults, the holidays have been a nightmare of scheduling. During his senior year in college, Travis went to work for a chain pharmacy which is known for being open 24/7/365. Nikki in her retail years sometimes was free on Christmas, but then she married a firefighter and all bets were off. When the kids were little we used to have a big dinner party on Christmas Eve, then open presents the next morning and relax the rest of the day. I miss that.

With Dale’s job, the one day of the year he was guaranteed to be home was Christmas Day. The touring industry is pretty seasonal, so it was usually easy enough for him to have downtime on that day. Particularly in the years when he was home from Thanksgiving till nearly Easter. Some years not so much, though. Our first Christmas, in 1981, he flew in off of AC/DC at midnight on Christmas Eve morning. That day we went scrounging for a tree, and found one for $12. It was short, spindly, and had an enormous hole on one side, but it was by-God real and it was our first.

Even the year (2001) he worked for the Trans Siberian Orchestra, whose entire schtick is Christmas music, he managed to make it home. The tour just happened to have a show in Nashville on December 26. Dale cruised in with his passengers on Christmas Eve day, and because nobody on the tour was permitted to fly home for the holiday, Dale brought nine guests with him for dinner that night: the tour manager and eight of the musicians. The viola player made homemade eggnog for us, and we demolished the biggest turkey I’ve ever seen, let alone cooked. 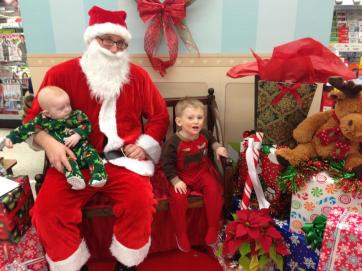 For the past dozen years or so, though, with the kids grown and having their own lives, we’ve had to give up the dinner parties and get together at the time when a majority of us were available. Dale was always there, and a few years ago his mother moved into the area, but sometimes Nikki had to eat and run, and there were years when Travis had to close the store Christmas Eve and open on Christmas Day. The grandsons arrived, but then when the divorce happened the boys’ presence was dictated by the court and nobody took that well.

Last Christmas, for one bright, shining moment, it all changed.

That time, it all came together, like magic. The boys and their mother live here now, and it was our turn to have them on Christmas Day. Travis last summer was promoted to general manager of his own store, guaranteeing him Christmas Day off. And Dale worked to mid-December, taking an extra week with the Grateful Dead (these days Dead and Company), and came home in plenty of time to enjoy a break.

Both the kids (they’re in their mid-thirties now) took me Christmas tree shopping. There’s a tree lot that for a number of years has set up on a vacant lot that used to be a funeral home. (Yeah, I’m one of those people who give directions like, “Turn left at where the old WalMart used to be.”) We’ve gotten into the habit of buying our trees there, and that’s what you call tradition. It was a special treat for me that Travis and Nikki were there, because they know I like tree-shopping as a family.

This year, it was no Charlie Brown tree. The kids bought us a huge, flocked one. I’d never had a flocked tree before in my life. My mother used to sneer at them, so I had never been interested, but when Nikki asked me if I wanted our chosen tree flocked, a mood came over me. Yes, this flocking was pretty. And when I felt of it, I could tell it would stay on the tree and make the branches sturdier. I accepted the flocking with much pleasure.

This year we weren’t particularly flush, but we had enough. When I asked Dale what he wanted for Christmas, he couldn’t think of anything. So he mentioned that his watch needed repair.

That’s not much of a present. I’d bought him that watch for Christmas several years before. But he couldn’t think of anything else, so I took it to where I’d bought it to see if they could fix it. They told me all it needed was a new battery. Sixteen bucks. I had them fix it, then texted Dale. “Watch only needed new battery. Suggestions? Off to browse Best Buy for ideas. I’ll return the watch when I get home.”

He replied, “Ok. I don’t know something fun maybe whatever is comfortable to budget lov you.”

“Fun it is. I know exactly what.” First time ever, I knew what to get him. I went looking for a VR headset.

Christmas Eve the boys got to toast marshmallows in the fireplace, a

tradition that for me goes back to about 1960 when my brother and I were preschoolers. They said goodbye to Buddy, their Elf on a Shelf, and hung their stockings by the chimney with care.

Christmas Day was like old times, but without the stress. Jack-O-Lantern pies made from Halloween decorations. Turkey–a cheap one shot with broth, which are never dry and always taste fabulous. Dressing with gravy, and I make the BEST gravy. My grandmother’s recipe for sweet potato casserole. Nobody poised to eat and run. Nobody arriving at the last minute. Nobody annoyed, and Dale even seemed to like his VR headset.