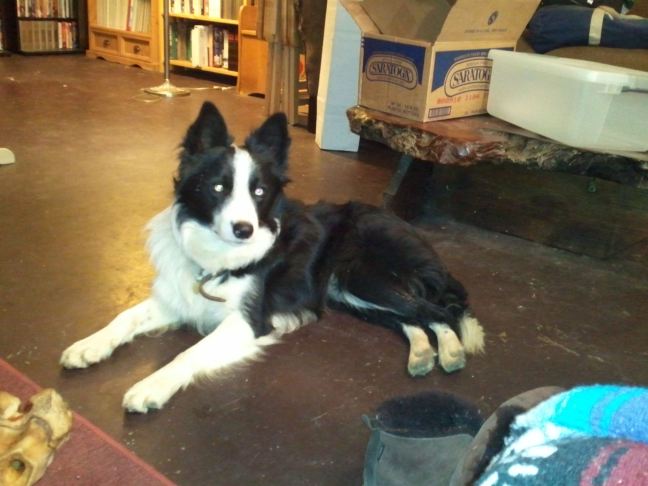 For the past couple of weeks I’ve been AWOL, and I apologize. I expect you all found other things to amuse, and I haven’t been much fun in any case. On the 31st I had oral surgery, and it went well, thank you. Then four days later my dog died.

You know, this blog was not intended to be a litany of people and pets I’ve lost. Honest. No, really. I swear it. When I migrated my website, I fully expected to have more worthwhile things to say than “my dog died.” But let me tell you about Max. He was the best dog ever.

In June of 2010, we found ourselves dogless, and it had only been seven months since I’d lost my very favorite cat, Silas. My husband knew I wanted another Border collie, and thought he might meet me at the airport on my return from a trip to New York and present me with a puppy, but thought better of it and let me pick out the puppy myself. So we found a breeder up the road in Beth Page, and went to look.

The place was clean, the dogs seemed happy, and there were several puppies to choose from. All the unusual-colored ones were spoken for, but I was happy to take a black-and-white rough coat. I picked up one of those, and he settled into my arms while I looked at the other puppies. We talked about rough coat vs. smooth coat, eye color, and other sundries. I wanted a rough coat, and thought I might like one with blue eyes, but at five weeks old it was too early to tell eye color. We looked at the parents. The father was a smallish, red, rough coat with erect ears. We were told he was an agility competitor, and his parents had both been imported from Scotland and Ireland. I liked that very much. Mom was quite large for a Border collie. She was floppy-eared and so shaggy she almost looked like an English Sheep Dog. Her people were working cattle dogs from Kentucky. 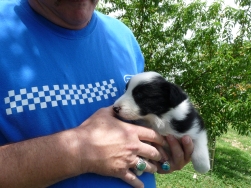 The puppy in my arms fell asleep, and when it came time to choose, I saw no reason to put him down. So we bought him and named him Max, then left him there to grow up for another week.

The following Saturday I went to pick him up after he’d had his shots, etc., and the breeder greeted me with, “I have good news. It looks like he’s going to have one blue eye.” One blue? I thought that was a little weird. But then later he ended up with one blue and one blue/brown merle, which I found unutterably cool.

At six weeks old, Max was still very young to be leaving home. Eight weeks is the recommended age. But I had the time and energy to focus on him. I would sit with him on the carpet, and he would play for about ten minutes, then fall asleep in my lap for five. Play for ten, sleep for five.

He was the first puppy I’d ever had who was specifically my dog, and with my husband on the road there was nobody else around to influence him. I bought several books on dog training (I can do anything if I have the instructions), and began readying him for the obedience class I planned to take, which would be a learning experience for both of us. At eight weeks I started showing him the concept of “fetch.” Mostly I would take his favorite toy, toss it in front of him, then praise and pet him when he picked it up. It was maybe a couple of weeks later that he caught on that the objective was for him to bring it to me, and from then on he was a fetching fool. A Border collie with a job is a happy puppy.

Some months later we signed up for an obedience class. He already knew how to sit, but hadn’t yet grasped coming on command. He learned it in no time flat. Every week the instructor was at a loss to fill the time because Max would pick up the day’s lesson in about five minutes, then go, “Okay, what else ya got?” I decided I liked having a dog who was smarter than me.

Even for a Border collie, Max was high energy and smarter than average. We have a broadcast-style (no wire) invisible fence we’d bought for our first Border collie, Ziggy. The instructions say to give the dog a couple of days to get used to the perimeter. Ziggy, being of a breed known for intelligence, learned it in a couple of hours. Max, at about a year old, learned it in five minutes. Which is also about how long it took him to learn to catch a Frisbee (aka Slobber Disk.)

As I said earlier, Max was a fetching fool. Anyone who came to our back door was immediately presented with Max’s honeycomb ball. Like a bridge troll, he expected the ball to be thrown several times before he would allow that person to pass. And no matter how many throws he got, he always went, “Piker!” Often when I walked down the driveway to get the mail, that ball would go rolling past me to the street. I’d turn around and find Max standing at the top, waiting for me to throw it for him. The neighbors all loved playing fetch with Max, which I encouraged because I could never keep up with him.

On August 4, two weeks ago, Max died. The vet showed me the x-ray, which revealed something that looked like a bone in his colon, and a shadow that looked like a massive infection. Since everyone in my family knows not to give bones to a dog, I can only guess he got it out of the garbage. In any case, he passed only a few minutes after I got him to the vet.

I’ll get another puppy, probably in a year or two. Meanwhile I’m working with my daughter’s dog, a Mountain Cur named Cooper. He’s not a stupid dog, but compared to Max he seems badly retarded. I’m so spoiled by Max.